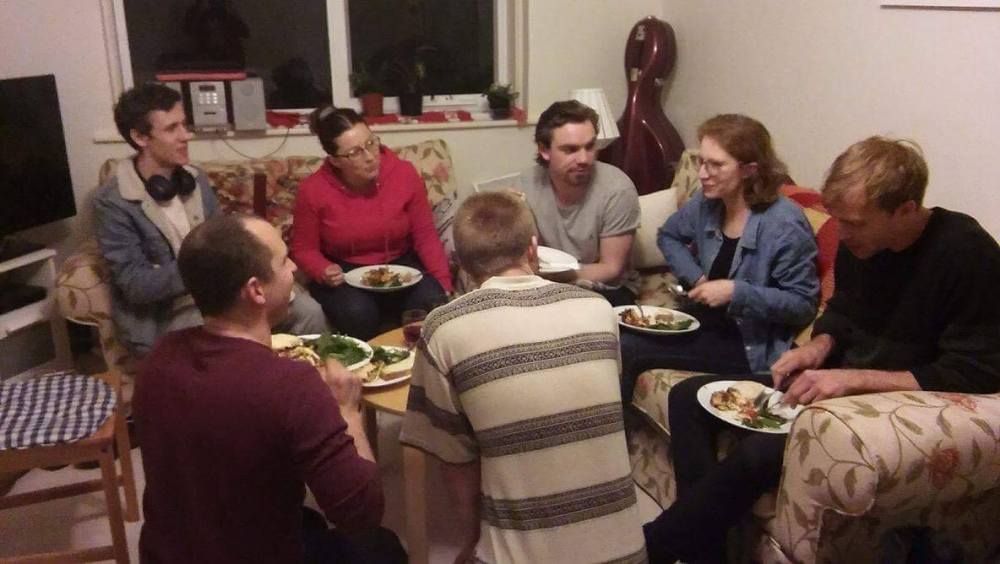 Brendan McDougall was our seventh dinner and a show writer and he shared some of his thoughts on his new work Sorry I Love You.

I’m Brendan and I’m trying to write this play called ‘Sorry I Love You’. I’m pretty garbage at writing about my own writing, and I’m still trying to work out whether this is a methodological weakness or strength.

I started the thing early last year when I’d just returned from overseas and had lost my driver’s license and thus job. I was pretty fucking unhappy, but it did mean that I found myself with more time with those of my friends who were also pretty unhappy, and we’d all drink too much together. A couple of these unhappy people were being made unhappy, at least in my eyes, by those in their lives that they loved the most – partners of two, three, four years.

I found myself a confidante on a knife’s edge – trying to be a supportive mate, someone who listened without judgement or anger to way too many stories of emotional abuse, gaslighting, and threats of violence; while also being someone who could steer people I cared about away from harm. We’d be at once trying to make them feel safe and loved in order to give them strength to make decisions about the situation they were in, while also wanting to take away their ability to choose – because they kept choosing things that were putting them in danger – and to get them the fuck out of there. We moved their stuff out of the house, only to have it all moved back in less than a week later. What could you do – they were in love.

The play became for me an attempt to dramatise this knife-edge – the mechanics of the entrapments of love, and the contradictions in caring for someone who, in their love for another, is in danger. I was also frustrated by the way so many narratives that contained domestic abuse seemed to characterise the perpetrator as just some lizardy monster. For me, the real monstrosity of the way people can be violent towards the people they love, lies in the fact that these (most of the time) men aren’t really monsters at all, but normal dudes in other contexts. The normalcy of the perpetrators of violence is what terrifies me – the way this violence seems to be engendered, somehow, in the way Australian men are told how to be men. The ubiquity in our culture of women rendered as objects vs men being defined by their possessions lies somewhere at the heart of the thing, and that’s more terrifying to me than the idea that some men are just born wrong in the head. Like all violence too, the root cause is intersectional – all mixed up in our inability as a social unit to deal with difference across categories of race, class and sexuality. A body on the street is just a body before it is encoded by its identity signifiers, and a body on the street is there because something in our society has made someone see that body as nothing but a body – an object containing a life that may be simply taken.

The above idea is pretty convoluted, and the whole thing gets big and complicated and confused fast and this bigness and complicatedness is why the first draft of the play failed, and why I chickened out for a year on trying to fix it. The attempted unpicking of the intersections overwhelmed it and me, and the play became a litany of checked boxes and nodded heads to identity politics, and in doing so lost what makes plays plays – the real-lifeyness of it. All this covering my ass meant that I let all my intended targets off the hook. The ass-covering is also because I was really frightened about being a straight white dude writing about violence against women, and all the connotations of stealing and profiting from stories from survivors, something I really don’t want to do. But it’s been irking me, as though I’d given up on something I cared about for reasons that were more about me than about the people I wanted to write for, so I’m returning to it as an exercise in empathy. It’s a hot mess at the moment, but my mum always told me that if I cleaned my shit, I’d be more likely to find what I’m looking for, and she has this uncanny ability to be right, years after I should’ve listened the bloody first time.

Thanks to VIMH for the opportunity. Looking forward to meeting you.

Brendan is a Melbourne-based playwright and theatre-maker. He is currently finishing up his Masters in Writing for Perfomance at the VCA. He co-founded Periscope Productions in 2012, and has been involved in all of their shows since, first as a performer, then as a director. He likes to eat oranges in the shower, and directed Lally Katz’s Apocalypse Bear Trilogy in 2016 and co-directed their 2017 production of Fire Place, a double-bill of Caryl Churchill’s A Number and Harold Pinter’s A Kind of Alaska.