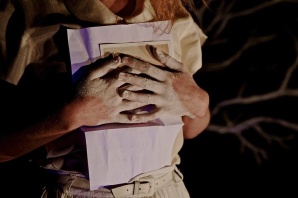 Somersault Theatre Company brought the world premiere of My Name is Truda Vitz to Tap Gallery in June 2014. I co-founded Somersault with Alison Rooke in January 2013 and this work, which I had been developing since 2011, was our first production.

It was a solo performance that focused on the moment my 17-year-old grandmother, Truda, fled Nazi-occupied Vienna in October 1938 and became classified as an Enemy Alien upon her arrival in England.

Whilst living under police curfew for the next seven years she put herself through university, married her biology tutor and became a British citizen, and had my Dad.

I focused the work on the ripple effects of her displacement. I was interested in how the decisions she was forced to make affected Dad and how his understanding of Truda has affected me (she died two months before I was born).

I was driven by my compulsion to understand how this huge history had burnt a hole in my family, and to understand our need to make sense of those we love, or imagine we might have loved.